The farm “La Luna” is situated among the gentle Chianti hills of Colli Fiorentini, about 15 km west of Florence. The farm consists of an ancient central body and a manor villa built by Carlo Allegri at the beginning of the twentieth century. In the nineteenth century, the farm represented the main nucleus of the small village of La Luna, and the viticulture, olive-growing and agricultural activity of the area revolved around it. For four generations, the manor has been  owned by the family Allegri, which counted among his descendants some people of great artistic talent.

The farmhouse is self-sufficient for electricity thanks to a photovoltaic system of last generation, also carries the composting, using organic residues in foodstuffs, and, at the moment, has in place the study of a system of subirrigazione for the recycling of sewage. It can therefore be defined as “ecoagriturismo“. The agriturismo makes available of its guests an attractive swimming pool in the open space to cheer their stay in the warm season.

The Products of Tenuta Caracciolo

The Agricultural Production of the Estate 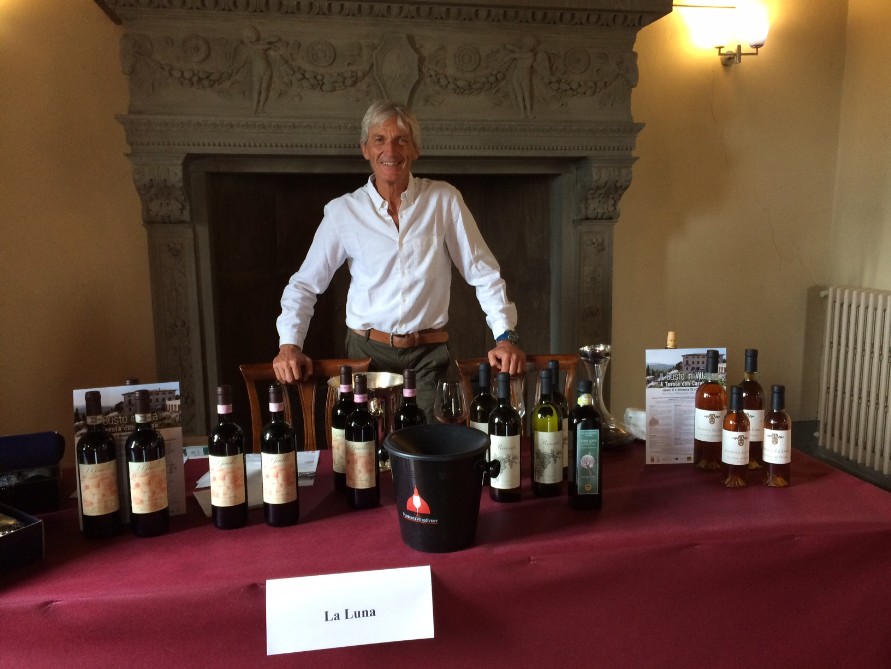 Loving this land is a duty, cultivating and caring for it to give everyone the opportunity to enjoy such a delicate wonder is an act of civilization, thinking that this corner of Italy can remain a happy oasis is an act of faith.

Villa Allegri is part of “Fattoria della Luna”, which also includes a small “agriturismo” farm holiday, but is situated so as to ensure, in their space, the guests’ privacy. It was built at the end of 19th century by the engineer Carlo Allegri, and is one of the historic buildings in Lastra a Signa. The villa is furnished with original fine beautiful nineteen – century pieces, all well preserved.

At the ground floor we have a big living entrance takes to the beautiful dining room with three big windows facing different sites of the garden, to the living kitchen where everything is important as the old big table, the fireplace the built-in kitchen tiled with Vietri ceramics with 6 cookers, oven, washing machine, dishwasher,  to the beautiful living room, magical place to relax doing its favourite activity and to the  first room (single or double) with an historic piano and historic photo gallery of the bridges built by Carlo and Ugo Allegri.

The Services of Villa Allegri

The apartments of the farmhouse

It has two pretty double rooms, a big dinette, and a pleasant bathroom. It is provided with an electric stove, oven, dishwasher, washing-machine, and a beautiful old marble wash-basin. Some small 20th century country paintings adorn the walls.

Two big double rooms, a single-double room, a living room, a dining room, a nice old kitchen with “cotto” floor and a fire-place and two bathrooms. It’s equipped with dishwasher and washmachine. Some old tuscan paintings at the walls

A big room with a double bed, a double bunk-bed, a pretty kitchen with kitchen utensils, and a big bathroom. It’s equipped with stoves and wash-machine.

The Services of the farmhouse la Luna 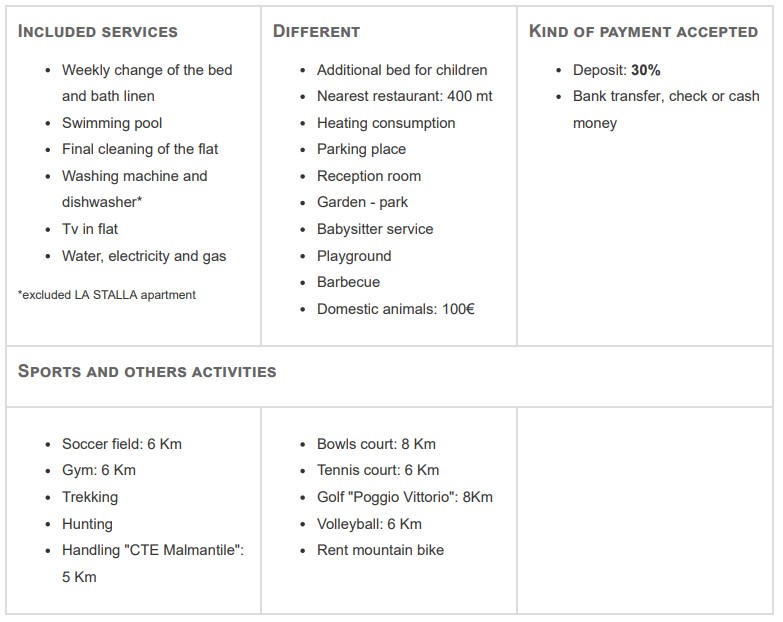 A closer look at the Farmhouse

Carlo Allegri designed and built some beautiful Tuscan villas and, after the unification of Italy, in 1897, completed the construction for the majestic Umberto I bridge in Rome.

Ugo Allegri, the grandfather of the current owners, who succeeded his father at the helm of the Allegri e C. company, built and completed the Umberto I Bridge in Turin in 1907, a monumental work that was inaugurated a second time in 1911, after some modifications stylistic and the addition of four statues, on the occasion of the Universal Exposition in 1911. He completed the Mazzini Bridge in Rome in 1911, then between 1907 and 1911, he built the San Paolo bridge, then took care of the technical design of the sculptural groups depicting the statues of the Winged Victories of the Vittorio Emanuele II Bridge. Subsequently began the reconstruction of the ancient Sublicio bridge, the first of ancient Rome, dated VII century BC, completed in 1918, then again the “Ponte Littorio” (today “Ponte Matteotti”) completed in 1929, and finally the Emanuele Filiberto Duce bridge d’Aosta at the Foro Italico inaugurated in 1939. In Florence he built the Ponte della Vittoria, then destroyed during the Second World War.

Vintage photos regarding the construction phases of some of these monumental works are visible in the small photo gallery attached to the farm.

The lovely swimming pool, located in a panoramic place, looks out like a window onto the green of the valley below and the surrounding hills.

During the summer weekends or on other occasions, you can spend pleasant evenings by candlelight, outdoors, at our wine shop. You will be offered cold dishes prepared with local products, and paired with our wines. The wine shop and the adjacent tasting room are two rooms furnished with taste to be able to taste and appreciate our products with tranquility.

The Cellar, the Tinaia and the Orciaia, the premises for the production and storage of wine and oil, are still the traditional ones that date back to a century. Particularly interesting is the visit and stay on the farm in the autumn period, during which guests can observe and, if they wish, actively participate in the production phases of wine, oil and vinsanto.

As for the surroundings, you are spoiled for choice. The location is strategic for making visits to numerous cities of art: starting with the Municipality of Lastra a Signa (see below) where the farm is located, Florence of course; Pisa with its Leaning Tower now reopened to the public; Siena, the city of the Palio where, it is said, “the best Italian possible” is spoken; Prato, where Romanesque, Gothic and Renaissance influences meet with artists of the caliber of Donatello, Giuliano da Sangallo, and many others; the medieval atmosphere of San Miniato that suggests the memory of the emperors Henry IV, Barbarossa and Federico II and the restless spirit of Pier delle Vigne, Lucca, Garfagnana, Mugello …

And if you want to go a little further and make a trip to the sea, you can get to Livorno and enjoy the entire neighboring coast between Viareggio to the north and Castiglioncello to the south and going further down you can then get to the Maremma and the wild beaches of Capalbio and … to our beautiful Agriturismo “Il Fontino”. In short, you won’t have time to get bored!

The toponym owes its name to the sandstone quarries, from which the “slabs” were obtained, and from the proximity to Signa, although until the 13th century it was known as Lastra a Gangalandi, from the name of the feudal family of the area. The settlement dates back to before the 11th century, when it was part of the fiefdoms of the Cadolingi diFucecchio.

Soon the village entered the expansionist aims of Florence, thanks also to its happy position on the Valdarno, and, despite three fortifications (the castle of Monte Cascioli, the castle of Monte Orlando and the most powerful fortress in the city center), it was conquered in 1365. Later the city walls were besieged by the Pisans in the war against Florence. In 1377 the walls were rebuilt with towers and battlements.

In 1529 the town, under the command of Francesco Ferrucci, resisted the imperial troops directed to the siege of Florence, but was captured and sacked. From Florentine Stories from the year 1527 to the year 1555 by Bernardo Segni: “He had, Segni writes, sent three companies of soldiers to the Plate by order of the Ten of , did not close that passage. Which, having foreboded the general prince of Oranges in chief of the imperial army, immediately detached six Spanish insignia from the field to fight the Slab. These arrived under the castle and presented themselves with the stairs to the walls, were thrown back by those inside; Hence, indignant, the captains asked the Oranges for artillery to beat the Earth, and having received it with more than 500 Lanzi sent by the Prince, they beat it in two bands, and then the assault was launched. While the besieged lacked the ammunition to be drawn, and were reasoning to agree, the Lanzi the first went inside, and cutting the soldiers and the Terrazzani to pieces, sacked it, although the Spaniards saved the lives of most of the soldiers, sop of the sizes only. And the castle was taken into account at the time, when Otto da Montauto commissioner proposed to the Prato guard marched there with four bands in his defense. “

The Ponte Nuovo over the Arno, built between 1150 and 1200, has been destroyed several times. The first during the siege by the troops of the lord of Lucca Castruccio Castracani, then during the Second World War during the German retreat.

In the ’60s,’ 70s and ’80s Adica Pongo was a very active manufacturer, among others the Pongo and DAS, it ceased its activity at the beginning of the 90s.

For any inquiries or information do not hesitate to contact us!